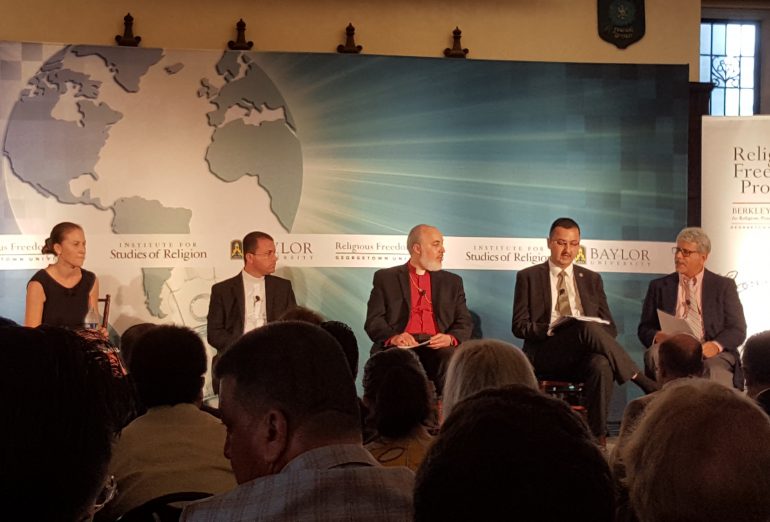 WASHINGTON, August 4, 2016 – Despite continued persecution, Shia are often ignored in discussions about minority difficulties in the Middle East.

Georgetown University and the Department of State last Thursday organized an event under the title “Threats to Religious and Ethnic Minorities under the Islamic State,” intending to bring representatives of targeted minorities to speak about their suffering and what their communities are going through in Syria and Iraq. This comes after Secretary of State John Kerry’s remark in March 2016, “My purpose here today is to assert in my judgment (ISIS) is responsible for genocide against groups in areas under its control including Yazidis, Christians and Shiite Muslims.”

As part of the agenda, the presenters were to suggest strategies “to ensure the viability of vulnerable religious and ethnic communities in Iraq and Syria.” Members of minority groups such as Yazidis, Christians, Kakai and Turkmen were invited to represent their communities.

Notably absent were any Shia rights activists. Although other speakers mentioned Shia and their suffering, there were no direct discussions or Shia activists on the panel. How is that other minorities affected by ISIS are given an opportunity to talk about their struggles, but Shia and Shaback are not given the same opportunity?

Shia are the largest minority affected by ISIS, not only in Iraq and Syria, but also by the ISIS-like mentality in other countries.

In Iraq alone, approximately 1,500 Shia were killed during the first six months of 2016. Another attack in July killed more than 300 and wounded 215 Shia Muslims. The attack took place in the city of Balad in a busy area where young people were shopping to celebrate the Eid (End of Holy month of Ramadan). Two attacks in Kadhimiya, north of Baghdad, took the lives of more than 40 Shia Muslims. Kadhimiya is a Shia city where pilgrims were visiting their ninth Imam.

In Syria, the situation is so bad that even activists cannot record and keep track of Shia victims.

Beside ISIS itself, anti-Shia and ISIS-minded clerics publicly encourage and permit Shia killing. For example, “Alvisal have shown lecturer who told the viewer that Shia are (kafir) infidel and they must be killed along side of westerner.”

Advocacy for any minority as one step forward in the broader human rights context. But seeing the State Department and Georgetown University ignoring the representation of Shia reinforces feelings of oppression by Shia.

It also raises the very simple question, why would the United States Department of State ignore the minority most oppressed under the Islamic State?