The Western Education of terrorists: Can humanity be taught?

WASHINGTON, September 4, 2014 — A number of Middle Eastern presidents, kings and despots have had a western education. What has that education done for them?

Education and experience are two sides of one coin: It takes both to succeed in life.

Education is the foundation of understanding, acceptance and respect of one for another without any condition. The right education grants the knowledge to not only provide an income, but also to shape our lives and our interactions with others. Education shapes minds; a good education makes us better human beings, people who can work in civilized societies and help those around them.

While a good education can shape good human beings, a bad or dishonest education can make us worse. What kind of education have national leaders received in the west?

The King of Bahrain studied at America’s Command and General Staff College and at The Leys School in Cambridge, England. He experienced the freedoms protected in the United Kingdom and the United States. He lived in an open society with free speech and a free press. Yet he fails to trust his own people with the freedoms he experienced here.

Given the opportunity for a liberating western education, King Hamad did not internalize the importance of freedom and human rights to take back to his country. Bahrainis are under brutal attack by their government. Many cases of killing, torture and rape have been recorded in Bahrain by human rights organizations such as Human rights watch, Amnesty International and Shia rights watch.

King Hamad seems to be consciously inflicting torture on the east. He refuses to endorse the basic rights he experienced in the west to his own people. He ignores the principles of leadership taught in the West which call for him to respect his people and allow them a say in their government. Instead he imposes the forms of oppression common in the region’s history.

Syrian president Bashar al-Assad also studied abroad. He did postgraduate study at the Western Eye Hospital in London. He has a better understanding of Western culture and freedom through his half-British wife. Although the opposition movement in Syria was hijacked by terrorist groups such as the al-Nusra Front and Islamic state of Iraq and al Sham (ISIS), in its early stages he could have resolved many issues before they exploded into civil war.

The kings of Qatar and United Arab Emirates, two countries with a history of funding terrorist groups, graduated from  the British Royal Military Academy at Sandhurst. Hamad bin Khalifa Al Thani, Former Emir of Qatar and Khalifa bin Zayed bin Sultan Al Nahyana both received a Western education and experienced many rights before they become leaders at home and suppressed their people.

While many countries fail to educate their people, other nations replace education with fabricated teachings of Islam. Many Islamic schools teach close-mindedness to their students, brainwashing them into extremism. The Al-Azhar University in Cairo was founded in 970 or 972 to teach the Qur’an and Islamic law. Al-Azhar intended to be the center of a growing community of scholars who would promote the message of Peace in the world.

Unfortunately, it didn’t work out that way. Graduates from that university end up with radical and extremist ideologies; they promote human rights abuse and targeted killings. Yusuf al-Qaradawi, 87, is an example of an Al-Azhar graduate. The U.K. and U.S. have banned him from visiting because of his promotion of violence against innocent people. Al-Qaradawi was a principal shareholder and a Sharia advisor of Bank al-Taqwa, a bank that the U.S and the UN associate with financing al-Qaeda.

There are other “scholars” like al-Qaradawi who have have the blood of innocent people, such as Shia Muslims, on their hands. In recent months, Al-Azhar has banned its students from connections or associations with Shia Muslims, further showing its sectarian face. Shafi Alajmi, a Kuwaiti scholar, is another extremist who has a record of hate speeches against Shia Muslims. In a June, 2013 speech in front of the embassy of Lebanon, he admitted ordering the slaughter of Sayed Mousawi, a Shia Muslim scholar, and his wife and two daughters in the town of Hatla, Syria.

Despite his admission of responsibility, the government of Kuwait has failed to hold Alajmi accountable for the murder. In a television interview, Alajmi said that he is collecting and sending money to Syrian extremists to buy weapons for foreign fighters. Despite his open support of terrorists, there has yet to be any foreign or domestic intervention.

The misinterpretation of islamic law has fueled the growing hatred and abuse of Shia Muslims in the Middle East. Leaders fail to react to the growing sectarianism endorsed by the western schools they attended. Not only do they fail to guide their people, but they also neglect to uphold punishment to those advocating extremism. Their governments deny their citizens basic freedoms, despite their life and educational experience in the west.

So far Western and Islamic educational institutions have failed to create true leaders who care for and protect those they lead. Most of our leaders lack the needed leadership skills to end inhumane treatment of their people. In fact many of them are the ones fueling terror and discrimination.

Maybe now is a perfect time for all educational centers and schools to evaluate their work. If the people they’ve educated are human rights violators, have these schools done what they intended to do?

This comes after the attack of the town Senjar, Iraq which is mainly populated with Izadies, and the warning of the United Nation toward the “massacre” in the city of Amerli, the mainly Shia Turkmen who are under siege of ISIS. Children, women and men are left without having even small portion of food to survive.

There are a couple concept that are missing in Secretary Hagel’s statement regarding the bloody and inhumane terrorist group ISIS. Unfortunately we are not studying the basic steps of creation, funding and training of this terrorist group.

ISIS was established in Syria around 2012 with the separation of the most extremist terrorist expelled from Jabhat al-Nusra in Syria. Many might know the Jabhat al-Nusra was created by countries such as Saudi Arabia and Qatar and were trained in military camps in Turkey and Jordan.

For those who have traveled to different countries or know the language, it is not hard to recognize that a large number of ISIS commanders have a Saudi Arabian Accent.

For example, in the video published on YouTube where an ISIS commander tells Shia hostages to say ISIS is great to avoid execution, the commander has a Saudi accent. In the video, several ISIS members then go behind the Shia and execute them. The executioners also have Saudi accents.

Saudi influence, combined with the wealth of kings and religious leaders, have encouraged foreigners to join the ISIS fight. These leaders include Mohammad Al Arifi in Saudi Arabia wand Shafi Al Ajami, a preacher and serving assistant dean of The Kuwait University college of Sharia in Kuwait.

Secretary Hagel mentioned in a press conference streamed on Fox News that we have to be prepared for everything. Well Mr. Secretary, preparation comes by not closing our eyes to the funds and weapons being delivered by the aforementioned countries to terrorist groups.

In order to bring peace and democracy to the region, the United States needs to cut the supplies to the terrorist groups. This could come by:

This is the best time for United States to prove that the technology and American dream is achievable. We are one nation and we have to prove to the people that humanity matters to us and we do what it takes to defend rights of people in need.

Mustafa is a Human Rights activist and the founder of Shia Rights Watch. He has been awarded by Human Rights Education Associates for his work on Minority Rights. He is a programmer and developer who dedicated his professional and academic life to protecting minorities and writing about their oppression. Due to his work and background in the Middle East, he has gained a great deal of knowledge and experience in the region and in working to prevent extremism and violence against all minorities. As a Shia Muslim, his main concern is in the oppression of Shia Muslims with respect to the rights of minorities. 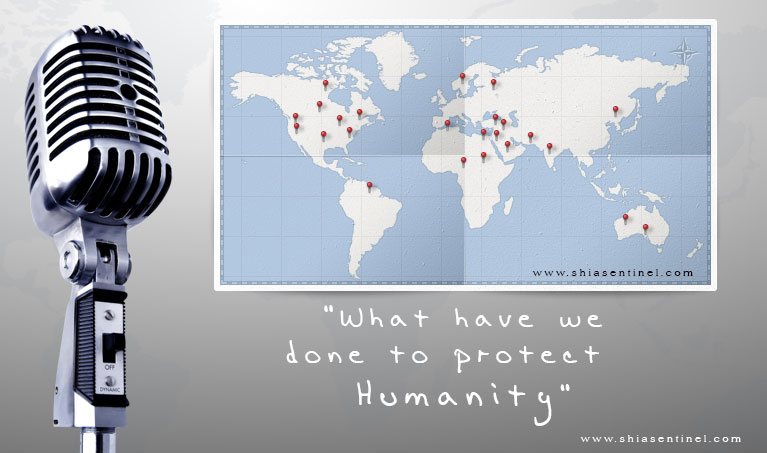 You might ask why “Shia Sentinel?” For many years, I was an injured and heartbroken child who ran away from his motherland, in hopes of starting a new journey. My goal since I got to the United States was to study, create my own company, and earn top money. However, the more I progressed in my education and interacted with people of different worlds, I came to realize that, in fact, I was not the only person who had spent a healthy portion of their life under terror. There were others like me, except, some had never received the chance to escape the violent conditions I too had experienced. I was blessed with opportunity, and they were left to bear the injustice that continued. With the unleashed chaos of the Arab Spring, all that I had created a new life upon was turned upside down. Seeing and hearing what the media showed and what social media depicted enticed flashbacks to my child. All that fear and turmoil I had turned back to was now flashing across my mind. Yet again, I was the heartbroken child awakened by the sound of gunshots below our apartment window. Except this time, what was being said on the news was not what I knew to be true. The violence depicted as consequence of religion was not what I was raised to believe. Lies were being used as shrouds to cover the crimes of leaders, unworthy of their positions. It was a though media was handed a lens which showed only what was politically beneficial. People of minority status were being used as shields for corruption and abuse. Thousands were killed, raped, tortured, and yet, there was no mention of them in the news.    At the time, I was working as a journalist for Freemuslim Association, inc, and with all that I had witness, I took an oath to do whatever I can to protect the most innocent religion in the world. Since I start working for Shia Rights I realized there is a lot to get done. That’s why I decided to dedicate my life toward being a watchdog for all the inhumane action against Shia Muslims. I may not have initially set out to do the job, but deep inside me there is something told me: You can do it; You have to. And so, years later, I have dedicated my life, my “american dream” for the sake of the world's “democratic dream”.

Anti-Shiism and the spiral of violence